von fotoopa
I made a new module for my big marble run. It's a double chain unit with super fast descent inside the 3D blocks. Because you can hardly see the marbles descending due to the limited opening between the blocks, a neopixel led string module has been added. Once the marbles are upstairs, they go down very quickly internally in hollow blocks. There's a pipe in the blocks where the marbles can run. The marbles are brought up by means of magnetic blocks on a long chain. Because you can't see the marbles descending in the blocks themselves, I've added 14 neo leds per side that indicate the place where the marble is descending. In turn, the colour is also altered so that you can see when there is more than one marble in the descent. The TXT-Controller controls everything and counts how many marbles go in and out. If you stop, both counters have to be the same after a while, otherwise a marble would be missing somewhere. All this is done via the TXT-Controller.
But the TXT-Controller can't easily control the speed of a neo led string. I'll use this function in my familiar FPGA module. I use in parallel the IR detector signals that are present at the top of the chain. When a marble descends, you can see this through the neo leds.
I've created quite a lot of new 3D parts. These can be found on Thingiverse:
https://www.thingiverse.com/thing:3991198

A lot of pictures can be seen on my Flickr web. 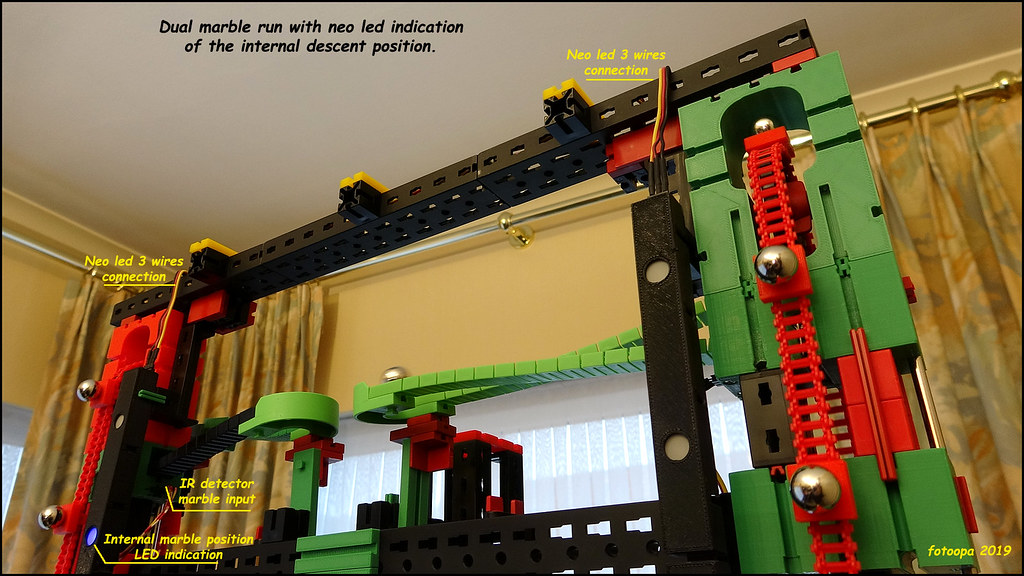 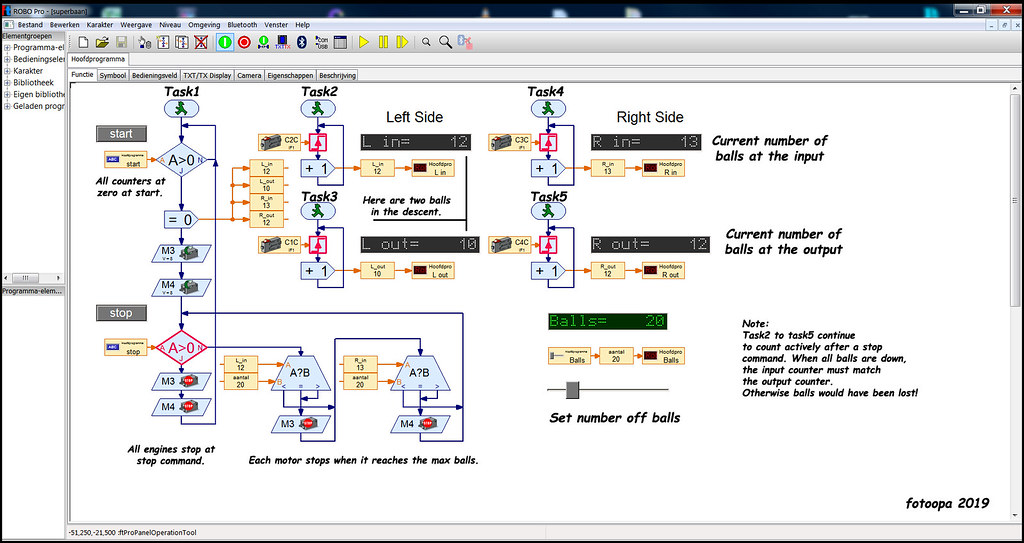 An overview of some 3D prints (not complete) 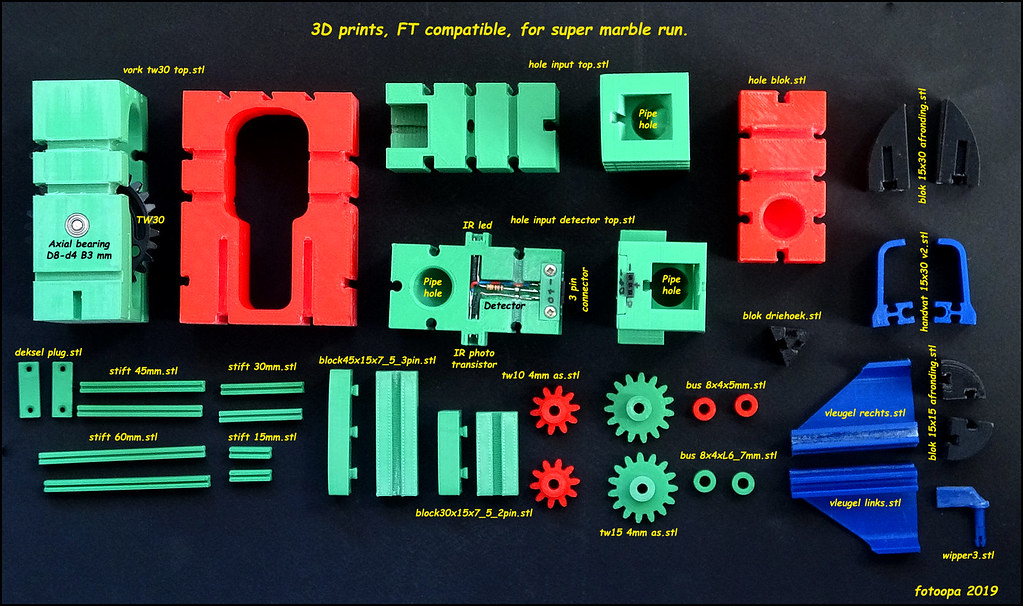 How the IR detector was made: 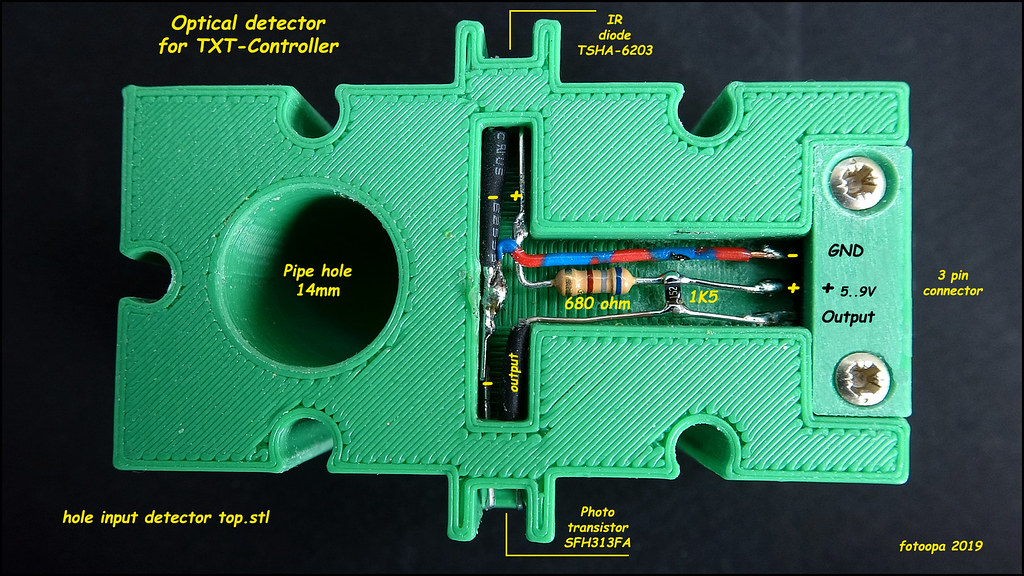 And a detail of the Neo led modules 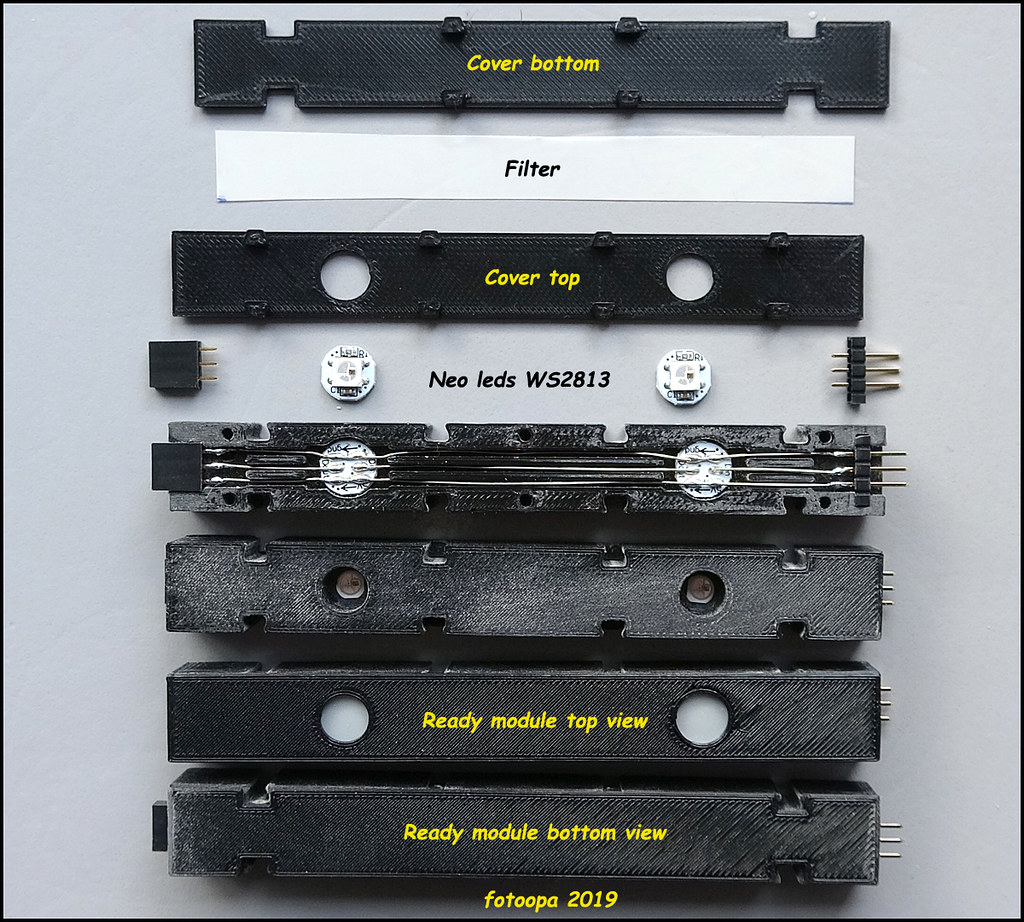 A cross section of a block with internal pipe 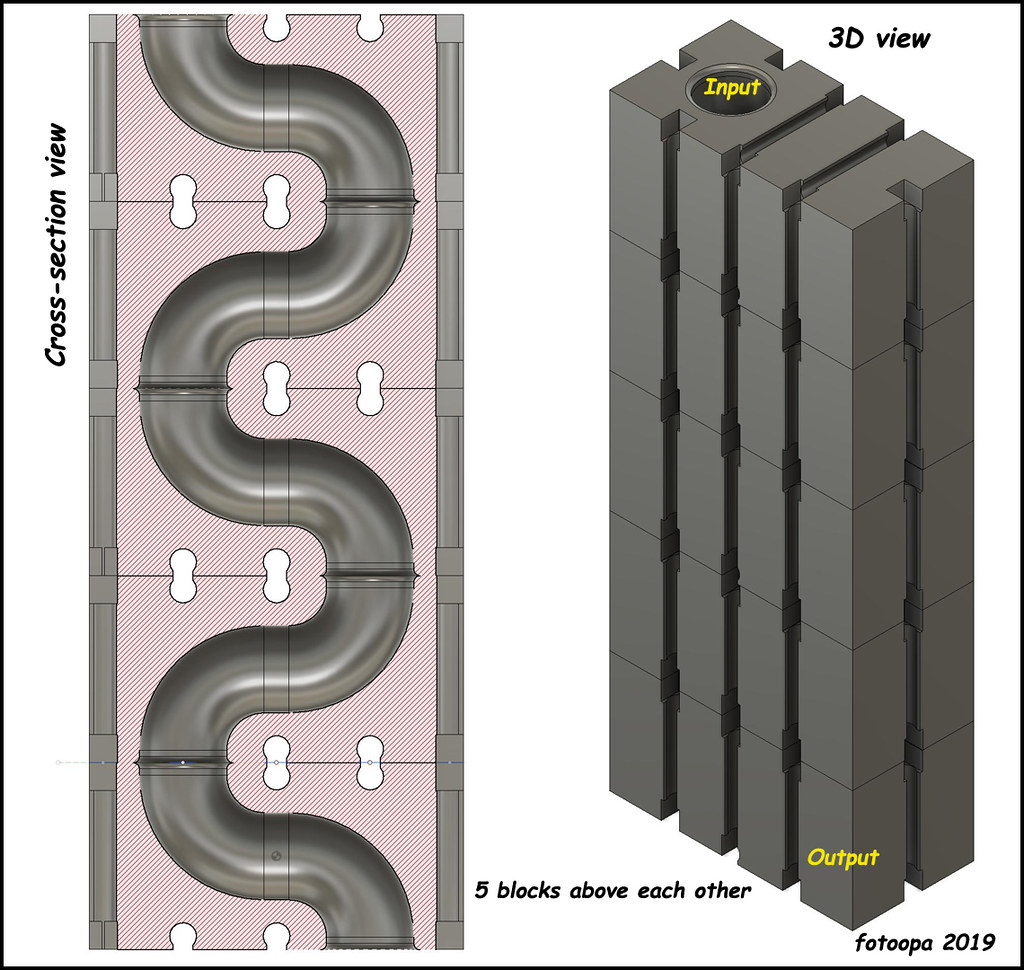 And the working test setup. 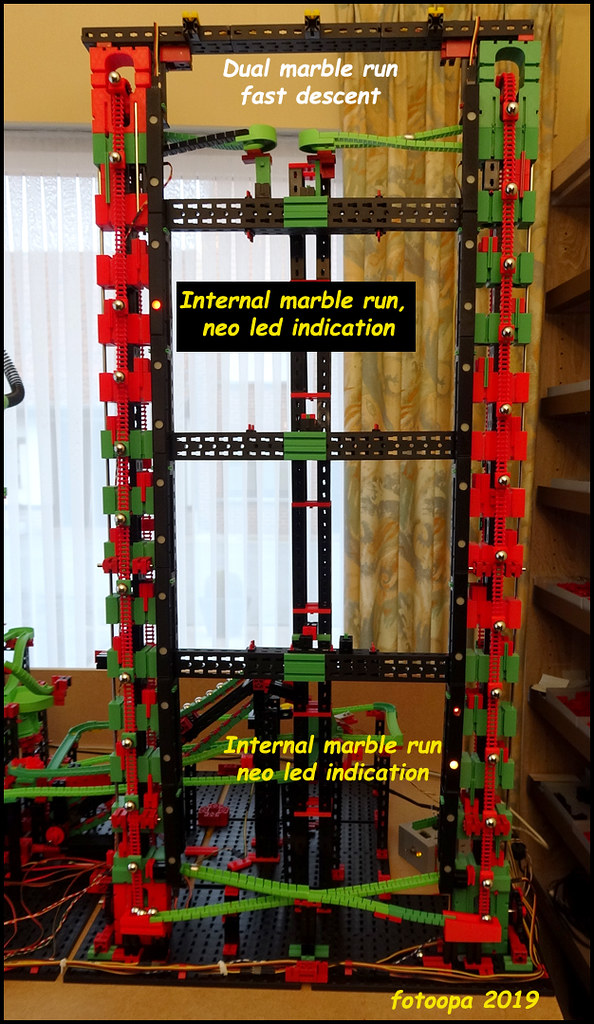 Analog signal measurement of 2 fast consecutive marbles. The pulse duration of a marble is about 17 msec, the minimum distance between 2 marbles is about 47 msec. If the marbles are supplied from the transport chain, the time between 2 consecutive marbles is much longer, around 2 sec. The speed is then determined by the motor and the number of teeth between each magnet holder.

This measurement indicates that you need to be able to process a pulse of at least 15 msec in the TXT-Controller. These signals are measured at the top of the input of the module where the IR detector is located. The C1..C4 inputs on the TXT-Controller can handle this pulse. 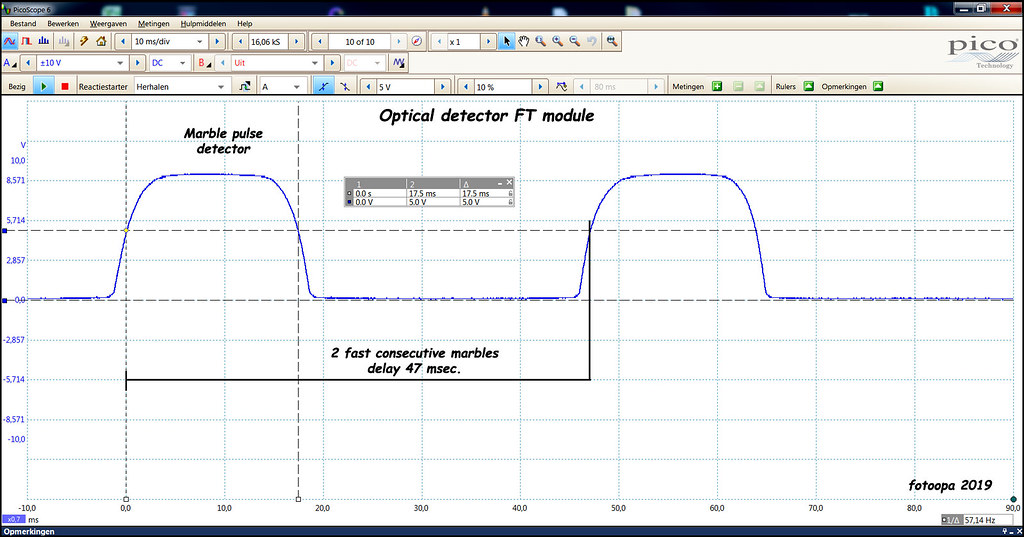 once again an impressive piece of work! I'd love to see a video, in particular of the fast descend and LED part.

edit: oops, didn't realize there was already a video on flickr, I assumed they'd only host images...

von fotoopa
Thank you, Jan!
I have a pro account at Flickr, so everyone can look at my photos and videos without any advertising in between.

The neo leds are now built in a string up to 64 leds, but that can be expanded if necessary. The big advantage is that you only need a 3 wire strip to go from one to the other LED. You can set all colors, all RGB values are 3x8 bit.
I only use the start sync detection at the top of the chain when entering the marble in the pipe block. The 14 consecutive leds are controlled with a short delay. This delay can be set. Each LED also has 4 preset colors in a 2 bit color mode. This way I don't have to change the 24 bit color data all the time. The driver looks at the mode and places the predefined color data in the output string.
Soon more LEDs for other indications will be included in the same string. My 4 way marble selector will also contain 4 of these neo leds. We are working on this.